So when I had got my test project set up so it at least ran, I started creating a whole set of tests, most of which just do Assert.Inconclusive("Not yet implemented"). Now I'm going through and implementing them one by one.

Now that I'd come this far, however, I realised that I actually want to fire my event for the test right at the end of LoadPopulatedSchedule, where I'm currently firing the UI event. So I could get rid of my 'trigger on one event, raise another' method, and add the new event to the end of LoadPopulatedSchedule, right after the UI Dispatcher invoke.(It seems like I should be able to make the test trigger on the UI event, but for now this seems close enough)

Of course, once I had everything triggering correctly on events, it turned out that I actually hadn't initialised the data structure correctly in the first place, and then that I was looking at the wrong set of results, and then that I wasn't correctly clearing my test data so that every subsequent test failed. And once I'd solved all them, I found that the UI method being dispatched was calling a method that referred to variables instantiated in the xaml, so were failing with null references when run under the test harness.


Reading material from this session:
basic stack overflow question
http://blogs.infosupport.com/unit-testing-with-silverlight/
http://www.codebadger.com/blog/post/2009/09/08/Unit-Testing-Silverlight-ViewModels-%28MVVM%29-That-Make-Asynchronous-Calls.aspx
Posted by Unknown at 3:46 AM No comments:

For the first two releases, I had only manual tests. This was clearly inadequate - I want to make some major changes to the app, and it's going to be pretty annoying to have to go and walk through all the app functionality after each change. I test software for a living, and I strongly believe in testing early and often - I am in theory a fan of test driven development, but I totally fell over when it came to actually building a new project from scratch. Time to fix that.

I began looking into all the test frameworks available for Windows Phone apps. There are several, and I didn't really know which way was going to be 'best' or 'easiest'. I already had the Silverlight Toolkit installed, and was working in a theoretically MVVM framework, so I looked for approaches designed to work with that. I found (among many others) these guides:
I then walked through the setup outlined in the TDD Kata, as far as the beginning of Test #1. Around this stage, I spent maybe two hours trying to get my classes to implement the interface as described, but getting blocked by the way they all inherited from phone specific classes.. So I moved away from getting 'unit tests' per the usual definition here, and wrote some more general tests - mostly only the simple ones that didn't require me building any fake objects. A few specific points that tripped me up
- A test failure (Assert.Fail or even Assert.Inconclusive) is treated as an exception during debugging, and there appears to be no way to turn this off. If, like me, you just wrote a bunch of tests that fail and you want to debug a specific one, you'll just have to Continue a lot.
- to use the (Tag[""]) functionality, you need "using Microsoft.Silverlight.Testing" and not just "using Microsoft.Silverlight.UnitTesting".

The next week, I realised that I wanted to get my app update published, and I didn't want to publish all the new test code I was writing. To get the update published ASAP, I created a new WindowsPhone Test Project, pulled out all the test code (handily saved into the Test folder for easy extraction) and shipped the existing app with a link to my survey added.

When I launched the new test project, I found that it crashed immediately when it started running the tests - and I couldn't run it in debug mode to figure out why. While looking for tips on how I should have set up this project, I found that the creator of this project, Jake Ginnivan, had done the 'building testable phone objects' work for me in the Windows Phone Essentials toolkit. Eventually I discovered that the problem was the exceptions thrown by failed tests (noted earlier) - so the Test Project was essentially useless to me. It's possible I simply missed the option to run it in debug mode, but my solution was to create a regular Windows Phone App project, and put the tests in there where I could safely run under debug mode. While investigating this I found another tutorial - Catel - Part 8 of n: WP7 Mango and unit testing the camera.

So, the current status of the project is
- need to reimplement my core MVVM framework with testable objects
- need to write actual unit tests around each base class
- I have about half the broader tests passing.Currently I'm working on one that fails because it doesn't wait for the asynchronous object population to complete. I think that's worth a whole new post.

While poking around in all these investigations, I also installed these useful looking dev tools, which I haven't yet explored:

PAX Digital Assistant: up to now

My plan for this blog is to be mostly about my app development work - building, testing, designing, using toolkits and frameworks and so on. I have one app under development and ideas for more. This post gives the background of my current app.

In the beginning - conception, ambition, scaling back, release
Late 2010, when the SDK for Windows Phone had been released and I was all excited about building an app, I realised that I should build an app for PAX. I began, but didn't get anything done in time for PAX of that year. Then I bought tickets to PAX East 2011, and decided that I would have an app out for that. I looked into MVVM programming, and got pretty much my first taste of actually using an MVC pattern (big props to Laurent Bugnion's toolkit). I was practicing all my (underdeveloped) project management skills, creating user stories, sketching out the interface, etc. Shockingly, I didn't give much thought to testing it (pretty egregious oversight, given that I'm an SDET). 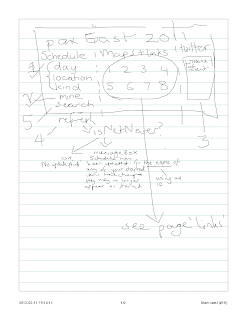 Unsurprisingly, my first ideas were ridiculously ambitious - it should interface with twitter, allowing you to follow all the pax-related accounts, and to tweet, and it would automatically append a #pax tag to any tweets you sent, and you should be able to view the map and zoom in from a suburb level right to a room level, and make notes on the map and share them with your friends in realtime. I handwrote the events into a custom, simple-as-possible xml format, then saved this schedule into the app itself (easy at the time, but meant that a full update was required for any schedule changes). As the dates got closer, I started cutting features. I actually got the app through certification about a week before PAX began, and then had to create an update with the full schedule that made it to the app store the day of PAX East 2011. I was unbelievably proud, and seeing the (mostly positive) reviews and getting a few emails from users was an amazing feeling.

version 2 - poor design bites back
I planned to improve it for PAX Prime, August, but in the end didn't really make any changes - my clunky overall design meant that simply updating all the content to be relevant for Prime was an effort. At PAX Prime I had some new users, but still a few bugs.  In particular, some users complained it was crashing frequently, which I couldn't repro. Eventually one of the users figured out that if he switched his region format from Canada to the USA, it stopped crashing - I thought I'd covered all my bases by randomly testing in region formats like french, two cyrillic languages and an asian language, but no. Immediately after PAX I was still motivated enough to do some work, and I fixed this bug as well as implementing a search feature among all the events.

doing it all right this time, for real
Coming up now we have PAX East 2012. I am in the process of redesigning the app under a test driven framework, so that I can add some major new features like exporting your scheduled events to your calendar, sharing them with friends on an associated website, and updating the event list from a website rather than releasing a new version of the app each time the schedule changes.  I created a Trello board to track what I'm doing - I have mostly been pretty consistent at keeping all my notes and sketches on my ipad (I use NoteTaker HD), but a dedicated task tracker seems like it'll make life easier. I decided that it would be useful to get more feedback from users (related: I'm taking a User Centred Design Certificate) so I wrote a survey, piloted it on three friends who used the app, and then published (well, submitted for certification, so far) an update that adds a link to this survey in the about page and a notice the first time the user opens it asking them to go take the survey. I also have some feedback in email already from users who contacted me through my about page.

Next few posts will probably cover
- how I'm building the test framework for my app, and problems I've run into where my design isn't test friendly
- installing and beginning to work with the Skydrive API
- setting up the website for the schedule to update from
Posted by Unknown at 7:48 PM No comments:

So there are a lot of reasons I've been planning to start blogging. A short summary:
1. for my records, like a journal. But why not just keep a journal?
2. the knowledge that others could read this will encourage me to organise my thoughts - similar to the teddy-bear solution, simply arranging my ideas for the consumption of others should make them clearer to me.
3. I think I can share information that will be useful to others, mostly around windows phone and my app development process.
Posted by Unknown at 12:47 PM No comments: