The next home network maintenance task took a little longer to solve. My mother wanted to create her own user account on the shared PC. She knew how to do this, but the new account kept giving an error when she tried to log on with it: 'the user profile service service failed the logon'. Cryptic.

It sounded easy. I was confident that I'd solve it in minutes. I googled it, and found several recommendations to delete the corrupt user profile/reg key and boom. But why would the newly created profile be corrupt? Turns out, it's not: it's not even created until you log on with it for the first time. So there was no profile to delete.

I tried turning off UAC, and creating a new account with admin rights instead of standard, but none of this worked. Eventually, I found this Microsoft Answers thread: http://answers.microsoft.com/en-us/windows/forum/windows_7-security/i-cannot-create-a-new-user-account-windows-7-the/dee340f7-5da9-402b-9e99-293dbd249a53?page=2 which pinpointed the problem as an access failure while copying data to the new user profile. I felt a little silly for not thinking to look through the event logs earlier in the process, but here is the step by step guide to fixing this error if you're having the same problem: 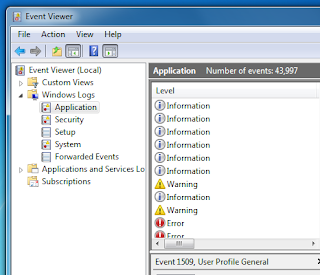 -  Now find any Warnings (the Error messages are likely telling you that the user profile didn't work, which you already know) and click on each of them to read the details about it 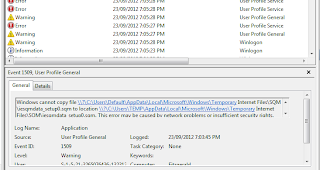 - You should be able to find a warning message that says 'Windows cannot copy file x to location C:\Users\Temp...'
- Find the file mentioned by typing in the full directory location given to the address bar of Windows Explorer. (You can't browse to it because it will be hidden).
WARNING: deleting or changing some files will break your computer. If you don't know what the file mentioned is, you should find someone who knows more than you do.
- If you know what you are doing, now go ahead and delete or give universal write access on the file. Et voila, your new user account should log on successfully.
Posted by Jay at 8:42 AM No comments:

And now for something completely different!

I'm at home in Australia for a few weeks* visiting my parents, so obviously I've been doing a little home PC maintenance. Between my dad, sister and brother they are able to pretty well manage everything, so it hasn't been too bad.

My most stunning accomplishment has been setting up a Windows Homegroup so that they can all send documents to the printer from their laptops and the second desktop, instead of kicking off anyone currently using the PC with the printer for a minute.

More interestingly, a couple months ago, my sister rang me early in the morning to say that she thought the wifi had been hacked. I rolled my eyes and asked what was happening, and she said that overnight, all the phones (which get carried in and out of the house, and therefore off the wireless network) had stopped connecting to the local wifi and said the password was incorrect. The laptops which had stayed in the house were still connected, but the laptop that had left the house that day was also unable to connect. When I directed her to the router admin page, which according to Dad's notes still had the default password, she was unable to log in. It appeared that she was right, and someone had indeed managed to change the password on their wifi network. I gave her instructions for resetting the router and setting the network back up, and left her to it.

Fast forward: I've been home for about a week. I'm testing some phone stuff on two different phones. As each phone sits idle, it disconnects from the wireless network, then seamlessly reconnects when I wake it up. Until one doesn't. It says the password is wrong. Then the other phone won't reconnect either. I go find my sisters iPhone and it also won't connect - password incorrect. (I have no interest in disconnecting my laptop to test it as well.) It appears that whatever happened before, has happened again.I go find my sister's documentation from that incident: she didn't change any of the passwords involved, including the router sitting on the default password. So yea, I guess it's not inconceivable that someone got into it again? I reset the router, set back up the network and the voip line, and this time change the router password.

I still find it a little unbelievable that someone would have gotten into their wireless network twice, in this random corner of the suburbs, but I can't come up with another explanation.


*Yes, it was incredibly inconvenient for my house to flood days before I left on an international trip.
Posted by Jay at 8:31 AM No comments:


So, ran into a few challenges recently.

I have mentioned that I work at Microsoft, but here it becomes relevant that I specifically work on the Windows Phone marketplace: the experience you have when you install an app as a user. As part of my job, I was involved in investigating and diagnosing <a href="http://windowsteamblog.com/windows_phone/b/windowsphone/archive/2012/08/14/can-t-download-an-app-here-s-why.aspx">the recent problem installing app updates</a>, and I also know the team involved in managing app certification, so I was well aware of the subsequent <a href="http://windowsteamblog.com/windows_phone/b/wpdev/archive/2012/08/14/app-publishing-temporarily-on-hold.aspx">delays in app publishing</a>.

This was pretty inconvenient for me personally, as I submitted the PAX Digital Assistant update for Prime to the marketplace only the day before certification was temporarily halted. I waited for my app to make its way through certification once everything resumed, and kept waiting. I checked at work and knew there were major delays catching up with the queue of apps that had built up, and so it wasn't unbelievable that mine hadn't made it through yet. I knew that I could contact the guys who ran the process and have my app fast tracked, but I couldn't decide if that was reasonable or not. In hindsight, I think it would have been: I had a good justification with the event actually happening, and other developers do contact a developer evangelist for similar deadlines. However I decided that it felt a little unfair to use my internal position like that, so I didn't do anything, and my app didn't make it through publishing until September 6, well after the useful moment had passed. Now I feel like I inconvenienced a bunch of people and made myself look flaky and unreliable, all for no good reason. Damn.

On the worse side, four days before PAX my apartment was flooded by a burst pipe, and my laptop was destroyed. As detailed in my last post, I did have a remote backup for the PAX app - but I hadn't done incremental uploads to the server of the last couple days of work I'd done before finishing it for Prime, so that work is now gone forever. The Flashcard app I'd created is also completely gone, as I hadn't bothered backing it up to the server at all (not a huge loss, but a foolish mistake). Could have been worse, of course: a month earlier the entire PAX app was stored only on my local machine and would have been gone. But could have been better as well. I need to make the incremental backup to the server as easy as the local incremental backup.
Posted by Jay at 7:39 AM No comments: